End of the Fugitive Slave Law 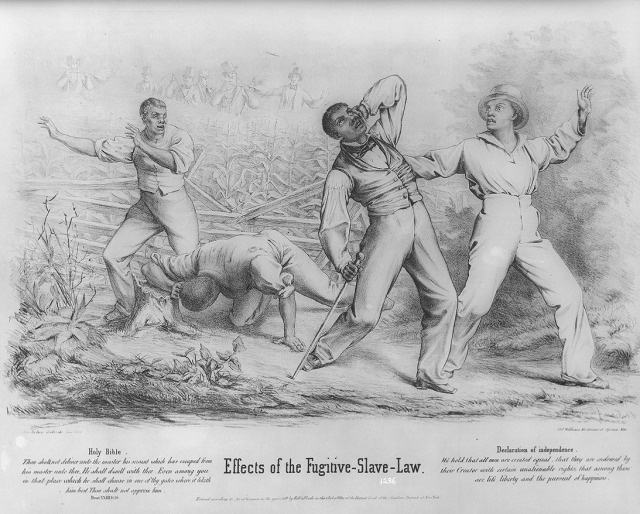 Tomorrow, June 28, 2014, besides being the centennial of the assassination of the Archduke Franz Ferdinand and his wife, which precipitated World War I, is the sesquicentennial of an altogether happier event, the end of the Fugitive Slave Act, perhaps the vilest, most horrific law ever to be placed on the books in the United States.

The Fugitive Slave Act had been the linchpin of the Compromise of 1850, promising to make it easier for southern slaveholders to reclaim slaves that escaped into the free northern states. It was a revision of the earlier fugitive slave law pass by Congress in 1793, which white Southerners had found ineffective for that purpose. In the decades that followed this law many state legislatures in the North had passed “personal liberty laws”: statutes that sought to make it difficult for slave catchers to operate on northern soil. While the U.S. Supreme Court in the case of Prigg vs. Pennsylvania (1844), ruled unconstitutional Pennsylvania’s personal liberty law, they also indicated that state authorities had no obligation to assist persons in northern states trying to reclaim slave property.

The Fugitive Slave Act of 1850 aimed to address this deficiency, in part, not only by requiring state authorities to assist slave catchers, but also obligating private citizens upon a demand by federal authorities to do the same. A fine of $1,000 could be levied upon anyone who refused such assistance, and the same fine plus six months in jail was made the punishment for any person that assisted a fugitive slave in evading capture. Furthermore, any black person could be held as a fugitive slave simply upon the sworn testimony of a claimant, and their status would adjudicated in front of a federal magistrate that would paid twice as much money for hearing the case if they found in favor of the alleged slaveholder instead of the alleged slave (a purposely created conflict of interest to make magistrates favor slaveholders or slaves).

The law caused outrage among African Americans in the North, who justly feared the last mentioned provision made any black person there subject to enslavement on the basis of perjured testimony, even if they were not an escaped slaves. It also caused anger among white Northerners, not only abolitionists, but also other whites that resented being forced into slave catching posses and who feared the law’s passage as evidence of the growing influence of “Slave Power” in the national government. This outrage resulted in a new wave of personal liberty laws being passed in the North, seeking, with considerable success, to frustrate the implementation of this much hated 1850 law.

Despite the difficult in enforcing it, which left many white Southerners feeling cheated out their main supposed gain under the Compromise of 1850, the Fugitive Slave Act of 1850 did result in the return of some escaped slaves, probably in the hundreds, from the North to renewed bondage in the South. It forced slaves that had made it out of the South to continue north to Canada, where they could finally be safe from capture and re-enslavement. The law remained on the books and continued to be utilized well into the Civil War, although its operation was curtailed because only loyal slaveholders could now make claims against the law, and law enforcement authorities and the the Union Army, often proved increasingly unable or unwilling to assist in returning slaves to bondage as the war wore on.

Nonetheless, when Congress repealed the Fugitive Slave Act of 1850 in late June 1864, while the action by this point in the war was mostly symbolic, it was not empty symbolism. Slavery ultimately depended for its survival on government to provide the force to guarantee the power of slaveholders to enforce discipline on their property. In repealing the fugitive slave law, Congress was in essence telling slaveholders they would no longer enjoy the police power of the federal government in this endeavor. In doing so, they essentially removed an important pillar of the legitimacy of the peculiar institution paving the way for the final passage and ratification of the 13th amendment the following year, forever ending slavery in the United States.

2 Responses to End of the Fugitive Slave Law