Fort Wagner and the One Gallant Rush: How It Matters and What Matters More

In a few days, on July 18, the sesquicentennial of the Civil War will roll around to the 54th Massachusetts Infantry’s failed attempt to storm Fort Wagner, South Carolina, made famous for current generations by the 1989 movie, Glory. On the one hand, the 54th’s attack on Fort Wagner, with the unit suffering 45 percent casualties, was one of many futile frontal assaults in the American Civil War, as tactics failed to keep up with the growing lethality of weaponry developed in the first half of the 19th century. On the other hand, if the 54th Massachusetts did not win in strictly military terms on July 18, 1863, they won a costly moral victory for their race, by proving black men would fight and die as bravely of white men in similarly adverse circumstances, when detractors had long claimed African Americans could not be trained as soldiers and would flee from the battlefield at the first hint of danger.

What is often forgotten is that the “One Gallant Rush” at Fort Wagner was the last of three engagements involving black troops in the spring and summer of 1863, their first use in combat since late October 1862 when the 1st Kansas Colored Infantry clashed with Confederate guerrillas at Island Mound, Missouri.

The first came on May 27, 1863, when black Louisiana troops, mostly free men of color from New Orleans, fighting for an ungrateful Union General Nathaniel Banks, participated in an ill-conceived frontal assault on Confederate positions at Port Hudson, Louisiana. The attack failed, but produced the first martyred black Union hero, Andre Cailloux, a captain in this pioneering unit, which had black officers (Banks was in the process of purging them when the engagement occurred, but many of them were still around to fight  at Port Hudson). Cailloux was killed bravely leading his company in the attack, and his body was later recovered and returned to New Orleans where thousands of people attended his funeral.

Eleven days later, on June 7, 1863, black units on the periphery of Ulysses S. Grant’s siege of Vicksburg, fighting with white Union soldiers of the 23rd Iowa Infantry, successfully fended off an attack by Confederate forces in Madison Parish, Louisiana, at what would become known as the Battle of Milliken’s Bend. Although the engagement was essentially won by fire support from the Union gunboat Choctaw on the Mississippi, black soldiers held their ground at the river’s bank, if for no other reason than they had nowhere left to retreat and a gunboat at their rear to pummel the attacking Confederates. But neither did they cravenly surrender, and this battle as in the case of Port Hudson and Fort Wagner was cited by supporters of black enlistment in the Union Army that African Americans were willing and able to fight and die as bravely as white soldiers.

These three battles collectively did much to silence critics who believed black men unfit to join the Union Army. But just as interesting as these early battles by African-American soldiers and ultimately more important was the impact of military service on their lives. This was something that was quickly apparent even during the war itself, as powerless chattel became armed warriors. Harper’s Weekly noted such one case, in their issue of July 4, 1863, in an article titled, “A Typical Negro.” The article focused on a slave named Gordon, and featured a large engraving, most memorable for the mass of scars from whippings on his back.

The engraving was based on a photograph taken in Baton Rouge, Lousiana, by a local photographer, William D. McPherson and his associate, “Mr. Oliver.” It can be seen immediately below.

Harper’s Weekly described Gordon’s story in the article that accompanied the engraving above and two others below. It read:

[The first engraving] represents the man as he entered our lines, with clothes torn and covered with mud and dirt from his long race through the swamps and bayous, chased as he had been for days and nights by his master with several neighbors and a pack of blood-hounds; another shows him as he underwent the surgical examination previous to being mustered into the service —his back furrowed and scarred with the traces of a whipping administered on Christmas-day last; and the third represents him in United States uniform, bearing the musket and prepared for duty.

This negro displayed unusual intelligence and energy. In order to foil the scent of the blood-hounds who were chasing him he took from his plantation onions, which he carried in his pockets. After crossing each creek or swamp he rubbed his body freely with these onions, and thus, no doubt, frequently threw the dogs off the scent.

At one time in Louisiana he served our troops as guide, and on one expedition was unfortunately taken prisoner by the rebels, who, infuriated beyond measure, tied him up and beat him, leaving him for dead. He came to life, however, and once more made his escape to our lines.

The photo of Gordon above was used in an earlier post on this blog to illustrate the motives of slaves for fleeing plantations to seek sanctuary with the Union Army, as the scars on his back are powerful testimony to the system of torment used to maintain slave discipline in the antebellum South. The article on Gordon in Harper’s Weekly discusses at length on the methods of physical punishment faced by slaves on plantations in Louisiana before freedom came, many of them quite sadistic in nature.

Yet for slaves like Gordon that joined the Union Army service their service was a transformative experience. They went from a short time from powerless chattels subject to horrific punishment (and even death) to strapping soldiers in what was effectively an army of liberation. While constrained by military discipline in the application of their new power and authority, the change was apparent to observers who saw them when they entered the army and then saw them again after they had been military service for some time. Indeed, this transformation became the subject of federal propaganda promoting the service of African Americans in the Union Army. A good example of this material comes from the article on Gordon in the July 4, 1863 issue of Harper’s Weekly, with engravings of him before and after he entered military service, described above and which can be seen immediately below.

An even better example of such “before and after” pictures of slaves becoming soldiers is Hubbard Pryor who served in the 44th U.S. Colored Troops. 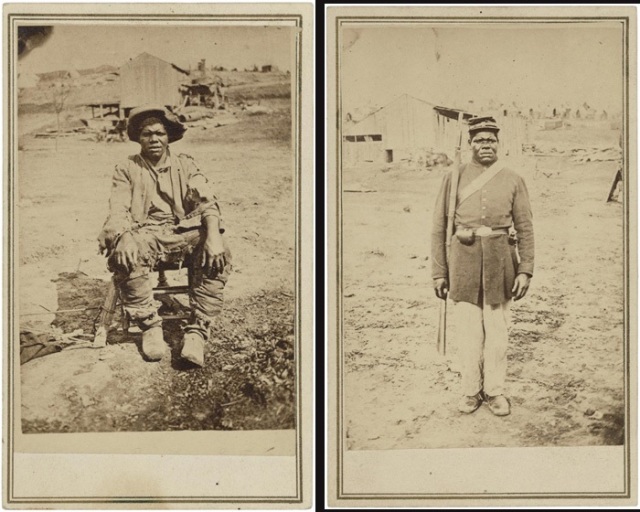 These pictures were taken on October 10, 1864, the first purporting to depict Hubbard Pryor before his enlistment, a slave like Gordon above dressed in ragged clothes, and the second after his enlistment as a smartly uniformed and armed Union soldier. Yet the staged nature of these pictures is made especially poignant by the fact that three days after they were taken, the 44th U.S. Colored Infantry in Dalton, Georgia, was overwhelmed by Confederate forces under John Bell Hood (on their ill-fated invasion of Tennessee after being forced out of Atlanta by the William Tecumseh Sherman’s Army of the Tennessee). Pryor became a prisoner and was stripped of his uniform by Hood’s men symbolically returning him to his status as a slave. He remained in Confederate hands until he was freed in May 1865 near Griffin, Georgia, making his way to a Union garrison in Rome, Georgia, looking reportedly worse on his arrival there than in the now famous staged “before” photo. After his discharge from the army, he returned home to Polk County, Georgia, where he married, raised a family, and lived quietly until his death in 1890.

Yet sometimes propaganda can be a way of communicating a version of the truth, and there is much truth to the staged images of Gordon, Hubbard Pryor, and others like them. Black soldiers, despite the dangers and pitfalls, often did benefit from their time in the Union Army. I examined these benefits, both during and after the Civil War in my 1996 dissertation, revised for publication as After the Glory: The Struggles of Black Civil War Veterans (Kansas, 2004). In this book, I discussed such wartime benefits as learning to read and write (quite significant for illiterate slaves), the chance to gain leadership skills as non-commissioned officers, political training fighting for equal pay (and against other indignities), and the psychological boost to their manhood of the dignity of being soldiers.

These benefits continued to accrue after the Civil War. As I write in the epilogue to After the Glory:

The Civil War left a significant positive legacy in general for the black soldiers that survived the conflict, one that validated their manhood.  They enjoyed a privileged position compared to other African Americans in the postwar period.  The 1890 census found a disproportionate percentage of them in the North and in the growing urban centers of the South, and as a group they enjoyed more prosperity compared to other African Americans.  Veterans were widely admired in the black community, and their contribution to Union victory helped soften the attitude of many white Northerners toward them as well, especially former soldiers.  African-American veterans also benefited from the largess of the federal government to Union veterans and their families, particularly in the form of military pensions.

Certainly, the picture for black Civil War veterans was not entirely rosy after the Civil War. As with white soldiers, some African Americans returned home sick, disabled, or psychologically broken, in many cases never becoming whole again. Even if they made it back healthy, some black veterans became targets after the war for white Southerners angry at the way white supremacy was in tatters, especially given the leadership roles ex-soldiers often assumed in the postwar black community. The citizenship and political rights they helped win for their race also proved fleeting, as Jim Crow and disfranchisement spread throughout the post-Reconstruction South. Finally, veterans who lived long enough saw the memory of their wartime role in the Civil War increasingly forgotten in the larger society.

But unquestionably, collectively black men who had Union as soldiers and sailors benefited more than they suffered as a result of their wartime service. So, when commemorating famous events in the history of African-American military participation in the Civil War, please remember that as crucial as they were, a less dramatic but much more significant transformation was occurring in the lives of black Union soldiers that played out during and after the war, and which was ultimately much more important than the “One Gallant Rush” at Fort Wagner, South Carolina, on July 18, 1863.