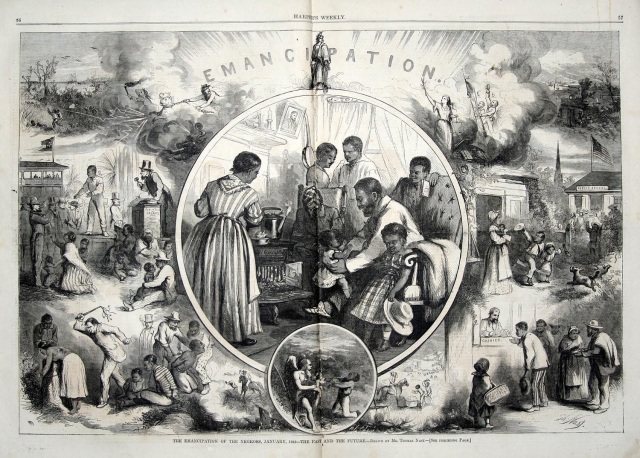 The second anniversary of this blog on January 21 passed without me realizing it until yesterday. For two years, I have used the same masthead for the blog (see above). I cropped it from an epic cartoon by Thomas Nast that appeared in the January 24, 1863 (150 years ago today) edition of Harper’s Weekly. Nast titled his piece, “The Emancipation of the Negroes, January, 1863 – The Past and The Future.”

Thomas Nast, of course, was the most famous political cartoonist in the United States during the Civil War and the era that followed. Africans Americans were a frequent subject of his cartoons, which were a bellwether of public opinion in the North towards the struggles of the race to be free and then to achieve equality afterward. Nast generally was sympathetic toward African Americans, although by the 1870s his cartoons began to express the disillusionment felt by many white Northerners by that time about Reconstruction in the South. Still, his cartoon in January 1863 captured the hope the Emancipation Proclamation had engendered among many people in the North and its sesquicentennial near the second anniversary of Civil War Emancipation is nicely serendipitous.