“Do nothing with them” 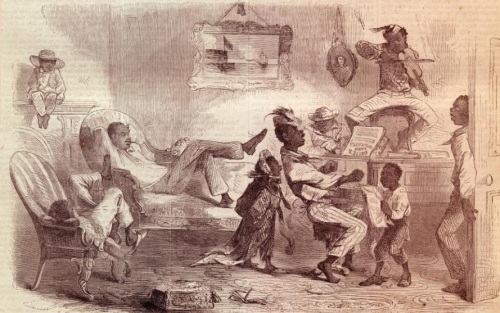 In mid-January 1862, Gen. Thomas Sherman, commander of Union forces at Port Royal, South Carolina, was a man who believed he had a problem. It was one that had confronted other Union commanders before him, such as Benjamin Butler and John Wool at Fortress Monroe. That is, how would the liberated slaves in Union-controlled Port Royal support themselves, now that the old plantation system had ceased? Like his counterparts in Virginia, he wrote to Washington, D.C., seeking guidance. His letter to the Adjutant General of the U.S. Army, dated January 15, 1862, stated:

SIR: I have the honor to ask the attention of the War Department to a subject upon which I have before hinted but which is of so much importance that I cannot refrain from again intruding it upon its notice. Of the large numbers of negroes on the islands in our possession some have come into the camps and obtained work, bringing with them their families. These are therefore cared for, and the work of the able-bodied men-numbering probably one out of five or six of a family-will be sufficient with the rations issued to support them. Those still remaining on the plantations are now living on the corn and potatoes left there, and when these are all consumed the negroes will be in a suffering condition or thrown upon the commissariat of the army for support.

For the future maintenance of these people some system must be established, and one which will permit them to sustain themselves; but before they can be left entirely to their own government they must be trained and instructed into a knowledge of personal and moral responsibility–which will be a matter of time. I have therefore the honor to recommend that suitable instructors be sent them to teach them all the necessary rudiments of civilization, and secondly, in the meantime that agents properly qualified be employed and sent here to take charge of the plantations and superintend the work of the blacks until they are sufficiently enlightened to think and provide for themselves. They should receive wages and the profits of the plantations after all expenses are paid should go to the Government. I can see no other way to lay a groundwork for future usefulness with this unfortunate class of people.

I would also suggest that a quantity of negro clothing be sent out here as soon as practicable, and this should include stuff for women’s and children’s wear.

This letter would prompt the arrival in early March 1862 of a group of male and female missionaries from New England, that became known as Gideon’s Band, sent by the American Missionary Association to educate and guide the ex-slaves of Port Royal in their transition to freedom.

The work of Gideon’s Band, and others like them, would be closely followed in the national press by a curious but often dubious public. Indeed, there was great skepticism among many white Americans of trying to teach slaves to be free. For instance, Kentucky Congressman Henry W. Wadsworth, attacked such work with slaves in the U.S. House of Representatives, on the same day as Sherman’s letter (January 15), asserting it was a waste of time since the character of slaves was fixed. He stated, “You have had your missionaries among them endeavoring to instill some ideas of freedom, &c., into the negro mind. His idea of freedom is that of a state in which he will be exempt from labor.”

It was not just border state Congressmen like Wadsworth that believed the slaves were lazy and unteachable. The cartoon above in the January 18, 1862 edition of Harper’s Weekly, depicting slaves in Port Royal occupying the parlor of their recently fled owner, captures powerfully the same attitude.

Frederick Douglass, the most famous ex-slave in America, expressed a very different opinion around the same time in the January 1862 edition of Douglass Monthly, in an essay titled, “What Shall Be Done with the Slaves If Emancipated.” After sarcastically dismissing a laundry list of objections to emancipation, he asked, “What shall be done with the four million slaves if they are emancipated?” His answer was simple: nothing should be done, because any intervention would harm rather than help ex-slaves. Douglass wrote:

Our answer is, do nothing with them; mind your business, and let them mind theirs. Your doing with them is their greatest misfortune. They have been undone by your doings, and all they now ask, and really have need of at your hands, is just to let them alone. They suffer by ever interference, and succeed best by being let alone. The Negro should have been let alone in Africa — let alone when pirates and robbers offered him for sale in our Christian slave markets — (more cruel and inhuman than the Mohammedan slave markets) — let alone by courts, judges, politicians, legislators and slave-drivers — let alone altogether, and assured that they were thus to be left alone forever, and that they must now make their own way in the world, just the same as any and every other variety of the human family. As colored men, we only ask to be allowed to do with ourselves, subject only to the same great laws for the welfare of human society which apply to other men, Jews, Gentiles, Barbarian, Sythian. Let us stand upon our own legs, work with our own hands, and eat bread in the sweat of our own brows. When you, our white fellow-countrymen, have attempted to do anyting for us, it has generally been to deprive us of some right, power or privilege which you yourself would die before you would submit to have taken from you. When the planters of the West Indies used to attempt to puzzle the pure-minded Wilberforce with the question, How shall we get rid of slavery? his simple answer was, “quit stealing.” In like manner, we answer those who are perpetually puzzling their brains with questions as to what shall be done with the Negro, “let him alone and mind your own business.” If you see him plowing in the open field, leveling the forest, at work with the spade, a rake a hoe, a pick-axe, or a bill — let him alone; he has a right to work. If you see him on his way to school, with spelling book, geography and arithmetic in his hands — let him alone. Don’t shut the door in his face, nor bolt your gates against him; he has a right to learn — let him alone. Don’t pass laws to degrade him. If he has a ballot in his hand, and is on his way to the ballot-box to deposit his vote for the man whom he think will most justly and wisely administer the Government which has the power of life and death over him, as well as others — let him alone; his right of choice as much deserves respect and protection as your own. If you see him on his way to the church, exercising religious liberty in accordance with this or that religious persuasion — let him alone. –Don’t meddle with him, nor trouble yourselves with any questions as to what shall be done with him.

So Frederick Douglass believed the slaves already were fully capable of being free, and hence should be left alone, even by well-meaning white people who felt they needed education and guidance for a time. His position no doubt reflected his experience of escaping slavery in antebellum Maryland for freedom in New England, and eventually chaffing under benevolent white mentors such as William Lloyd Garrison. Of course, Garrison and other white abolitionists did not share Douglass’ sentiments, and would soon enthusiastically launch work in the Union-occupied South to aid freed slaves in their transition from property to people. The story of such interactions is fascinating, but is a story for another time.